Once again, I write for the DN about a controversial science subject. DL 57/2016, that creates a regime for contracting doctorates aiming to stimulating the scientific employment and to value the activities of scientific investigation and technological development in the institutions. In practice, this new legal regime turns into contracts the post-doctoral fellowships that are paid only in net terms without social security contributions or taxes. Instead of a net grant of €1495 paid only twelve times a year, the new contracts provide a salary with discounts for social security and IRS, which results in the same net value for doctorates. For the institutions the cost is more than the double due to the weight of taxes and legal discounts. However, as these funds result from projects, mainly financed by European funds, they do not result in an increase of costs but only in an increase of allocated costs. For the state the balance is zero since the additional value reverts to finance and social security, even contributing to its sustainability.

What should be a measure of common sense, in a sector that has evolved spectacularly over the past 40 years, has become a meaningless war between government, institutions and fellows. Instead of taking this opportunity together to increase the attractiveness of our institutions and to establish talent, we are lost in bureaucracies, demonstrations and accusations in the media. The government has not resisted to turn the country's competitiveness issue into a much sexier and more popular fight against precariousness. Institutions, in particular the least competitive, have turned into guardians of austerity using the infinite arsenal of bureaucracy to wage what should be an opportunity to rejuvenate and increase the competitiveness of their centers. The grantees, in particular the less competitive ones, keep promoting protest actions that make the issue a union claim that only reduces their social support. In the midst of this, I watched incredulously to the manifestations of grantees during the 2018 Science meeting. Against the Minister who proposed the Law, the Prime Minister who approved it in the Council of Ministers and the President of the Republic that promulgated it! All this while the leaders who boycott the Law and the representatives of the parties that are not in the government cynically laugh at the assistance.

Another perfect example of the atavism that Mariano Gago spoke so much about, this mixture of "sad defeatism, apparent good sense, anxiety and fear of the future that form our very Portuguese web of doom, based on centuries of poverty and lack of opportunities." Probably the best sentence to describe modern Portugal that costs us so much to leave behind.

With a system of higher education, historically wedged between the most serious economic crisis ever and a demographic abyss, the question of hiring researchers is absolutely fundamental to meet the challenge of knowledge and competitiveness. We are talking about our best young people who (still) have not emigrated and who can not be transformed or debugged, due to lack of opportunities, in unsuccessful trade union leaders. We are talking about one or two generations of highly skilled people who are of childbearing age and at the peak of their capabilities. These people should be framed in new institutions capable of developing competitive poles that will be key to attracting the new generation of European funds focused primarily on science, technology and innovation. These institutions exist a little throughout Europe (with the example of Germany) where young researchers do their postdoctoral studies in collaboration with companies and startups where they will later work. In any developed country half of the doctorates are in companies. They are not trained to be academics, but to be highly competitive cadres in the business sector. They do not specialize in enriching the curricula of their counselors, contributing to atavism. They choose centers and competitive areas that are often cross-border and interdisciplinary in order to maximize the chances of having or setting up their jobs.

Here lies the main challenge of knowledge and competitiveness in Portugal and Madeira. To create conditions to have centers of excellence and competitive, capable of being the engine of economic development. Centers that become poles of attraction of international talent and investment. All this does not cost money, it requires vision, courage and a change of mentalities and priorities. Madeira urgently needs an institution that is able to accommodate these centers with management stability and the ability to attract and give career opportunities to young people who are competitive. Always with great rigor and demand and in determining areas for the economy and the opportunities of the future: digital technologies, sea and biodiversity.

PS: I take this opportunity to give you reading recommendations and music for the Summer. For politicians and aspirants "O estado empreendedor" and "Value of Everything: Making and Taking in the Global Economy" by Mariana Mazzucato. For those who are frightened of the present and future "Enlightment Now: The Case for Reason, Humanism and Progress" by Steven Pinker. Two very good records: "All that reckoning" from Cowboys Junkies and "Lamp lit prose" from Dirty Projectors." 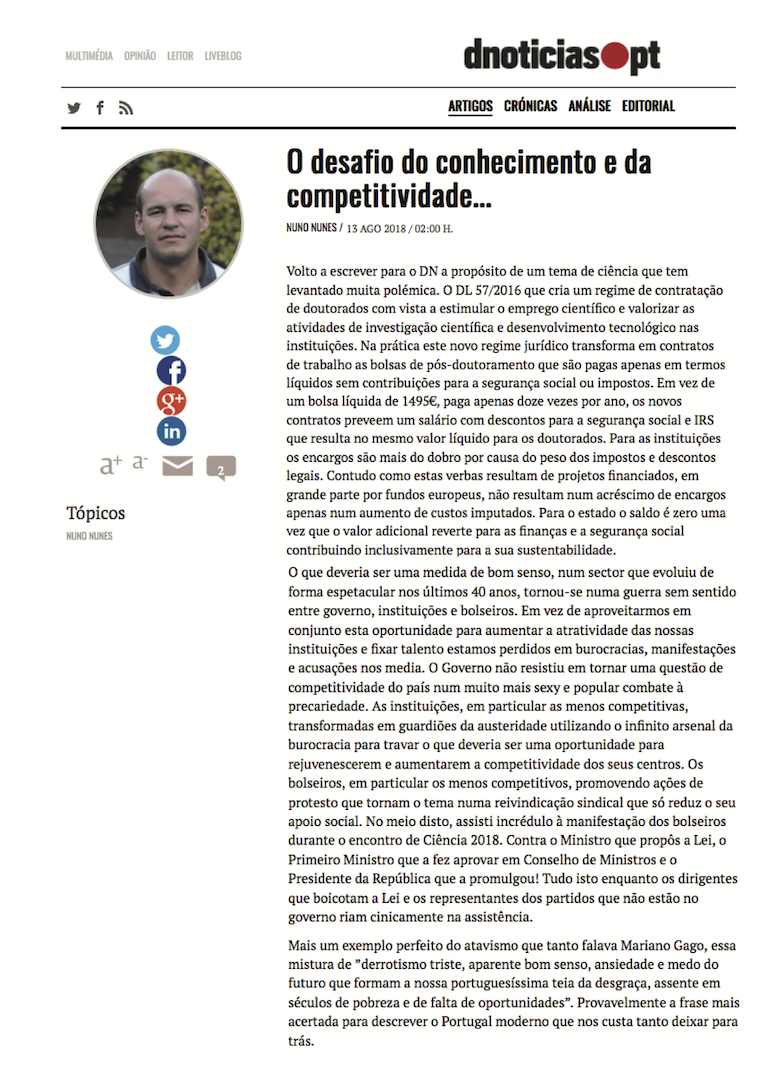 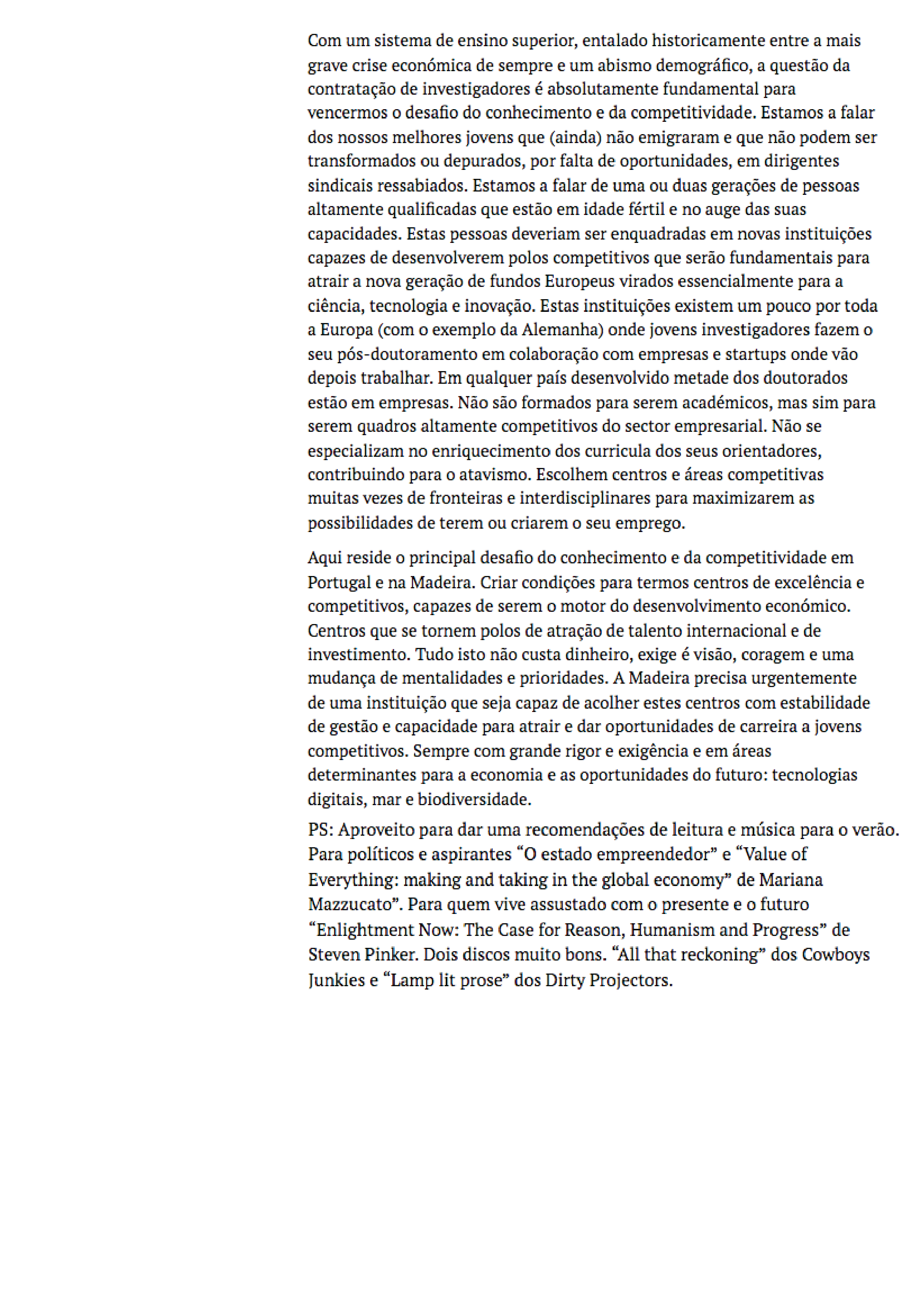