A group of students from the Masters of Entertainment Technology participated on the Videojogos Conference, in Porto, Portugal, and won the first prize on both demo and poster competitions. 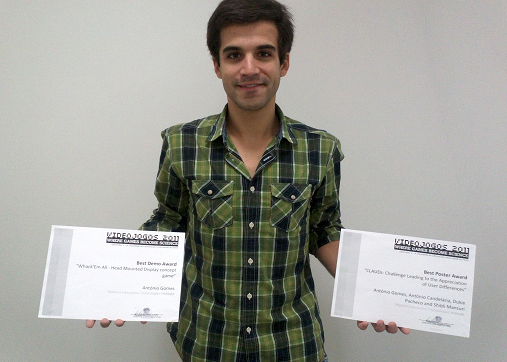 The Videojogos conference is a multidisciplinary event seeking for contributions from several areas of knowledge including art, game narrative, computational aspects of the field as well as its study, theory and critic reflexion about practics and application in both the market and industry.

António Gomes, a student from the MET Portugal Program wrote the proposals for both Demo and Poster Awards competitions, whose practical component where developed, on the Demo end, during the course of Building Virtual Worlds in the Entertainment Technology Center, Pittsburgh, along with another Portuguese MET Student, Pedro Candelária, Animish Gadve and Tim Forsythe (http://www.behance.net/apgomes/frame/1230829). The Poster refers to a Research Project developed entirely by MET Portugal Students including António Gomes, António Candelária and Shibli Mansuri.

According to António, “these awards reflect the top level education we get from both University of Madeira and the Entertainment Technology CenterI believe we won because we combined our strengths working as a team and leaving multicultural differences aside, as it’s required in such a broad program.. We combined programming and design to come up with good products and the audience, who voted for us, recognized that”.

Feedbot project was awarded an honourable mention for its work in technology and innovation by Exame Informática's Science and Technology Awards.

This project is being developed at ISR-Lisboa under the CMU Portugal program and ITI....

Cláudia Silva had an opinion article about transdisciplinarity published in Público on May 8.

In the scope of the MODI project (H2020 - Creative Europe funding), there will be three talks on May 8, starting at 2pm, at the classroom, at the -2 floor of Tecnopolo. These talks are open to the public in general.

Nuno Correia, PI of MODI project, will be in Madeira during the week of May 6-12 for project meetings and development with Raul Masu, project researcher and guests Stephan Jŭrgen, Jochen Feitsch and William Primett.

Researchers Paulo Bala, Raul Masu, Valentina Nisi, and Nuno Nunes have proudly received a CHI 2019 Honourable Mention with the paper "'When the Elephant...

In the scope of the University of Madeira's (UMa) 30 years commemorations, on February 20, UMa had an Open Day, which included visits to M-ITI.

In order to celebrate the...